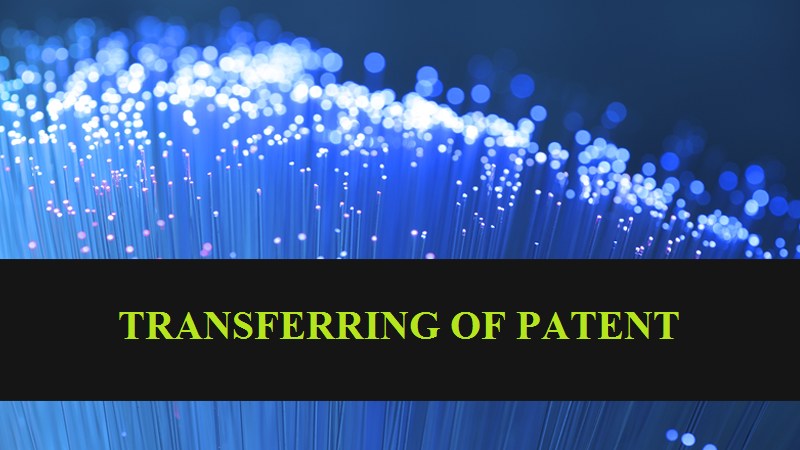 The importance of intellectual property in today’s world is unfathomable. People today are more vigilant about their intellectual property than they were a decade ago. The protection of intellectual property is integral in order to encourage innovation and creativity in inventions and also to give an incentive to the inventors and creators. In order to avoid any discrepancies, various global organizations have ever since formulated numerous treaties for the systematic working and smooth facilitation for the registration and commercial exploitation of one’s intellectual property rights. We now have half a dozen laws to protect and provide for transfer and distribution of copyrights, trademarks, patents and industrial designs among other intellectual property. In this article, we’re specifically going to focus on how the ownership of a patent can be completely transferred, its legal requirements and the legal procedure. We’re going to look at how a patent can be transferred, different methods of transfer, requirements of a transfer, and how to defend or file claims over a patent in different jurisdictions.

Before you’re all set to hand over your patent/invention to the designated person, you need to consider certain aspects which are important in the transfer.

a. Transfer to be documented

When you transfer a patent, you need to make sure that the same is done in a written and duly executed document, regarding the rights that you are handing over to the assignee/licensee so that in case complications arise in future, with the legal backing support in your contentions that creates a clear chain of transfer of rights to prove ownership over a property.

b. Establish your ownership

Make sure to include complete bibliographic information about the patent like patent number, title, priority application detail etc. Correctly spell the names like legal name if the assignee is a business or a company, if there are multiple owners of the patent, name all the owners. Also, make sure all official documents are notarized. This provides credibility to your documents. If you can’t get it notarized, get it attested by at least two witnesses.

Make sure to ask the employees to sign a proprietary information agreement. This automatically assigns inventions and designs to the business. Other options include signing an automatic assignment or an explicit assignment. This will provide further clarity in identifying ownership.

A patent can either be transferred permanently via assignment or partly or temporarily via license. However, it can also be transferred by operation of law.

You should assign your patent only if you want to part with your patent/invention and the rights related to it permanently. Here Patent Attorney in India would like to inform you that once you assign your patent to the assignee, you will not be able to get the same back. These are usually made under contractor agreements or under employment. For example, when a company acquires another company, it also acquires the intellectual property of the latter for life. Assignment is also preferred by movie studios in cases wherein they need capital to make the movie. They henceforth assign rights of the movie to an investor in return for financial capital for the movie.

An assignment can be done by way of legal assignment, wherein the assignee enters his name as the patent owner after which he becomes the proprietor of the patent and is henceforth entitled to all the rights concerning the patent. An assignment can also be done by way of equitable assignments, where the patentee agrees to share the ownership of the patent with another person via an agreement. In such a scenario, he therefore cannot register his name as the proprietor, but the assignee may have notice of his interest in the patent entered in the register. Moreover, a patent can be transferred by means of mortgages, wherein the patent owner assigns his entire/ part of his rights to the assignor in return for a financial consideration. Once the owner repays the same consideration back to the assignee, the rights are restored to the owner.

License refers as temporary transfer of your intellectual property rights and allows you to maintain a certain chain of command over the transferred intellectual property. When licensing, you can decide the duration of the exploitation, the jurisdiction as to where the IP can be exploited as well as whether the licensee can further sub-license the patent/invention. License upholds the principle of reversion of property, that is, your rights return to you after a certain condition like disputes. A license ends when i) the time period of license is over ii) the licensee fails to fulfill the conditions like it’s commercialization or iii) licensee breaches any terms of the license agreement

A patent can be transferred by means of- i) voluntary licenses where the terms of the agreement are mutually agreed to by the licensor and the licensee. By way of a voluntary license, the patent owner gives the rights to make, use or sell the patented article ii) Statutory license is basically granted by the government to a third party to make use of the patented product in view of public interest. An example of statutory licenses is compulsory licenses which are also granted by the government without the permission of the patent holder. This is granted if the government feels that the patented article is not available to the general public at an affordable price or if the article is unable to fulfill the requirements of the public. iii) Exclusive Licenses and Limited Licenses where an exclusive license excludes all other parties from the right to use the invention. The rights may be divided and assigned, restrained entirely or in part. In a limited license, the limitation may arise as to persons, time, place, manufacture, use or sale. iv) Express and Implied Licenses: An express license is one in which the permission to use the patent is given in express terms. Such a license is not valid unless it is in writing in a document embodying the terms and conditions. In case of implied license though the permission is not given in express terms, it is implied from the circumstances.

BY OPERATION OF LAW

This mostly happens on the death of the patent holder/owner. When the owner of an IP dies, his rights pass on to his/her legal heir. The provisions of law also come into play in case of winding up or dissolution of a company.

Tags : How to Transfer Ownership of Patents , Patent Transfer , Transferring Of Patent